How Newell Burch Survived Andersonville Prison: Among the First to Arrive and the Last to Leave 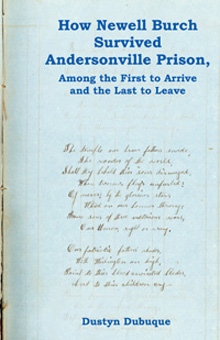 Newell Burch Didn’t Just Survive Andersonville Prison. He actually made a difference in the lives of his fellow soldiers imprisoned with him. He improved the rations of the men around him. He “cured” his own gangrene. He helped many others who were sick. At every turn, he exercised concern for his fellowman. Find out how he accomplished all this in an unimaginable environment of filth and lack at Andersonville Prison. This is the amazing story of a man who was among the first to arrive and the last to leave Andersonville and kept a first-hand account of his experience.

“The Confederate Andersonville Prison was a place that, said one prisoner on entering, “almost froze our blood with horror” — a place so inhuman its commander was executed for war crimes. Not only did Burch live through it, but he kept a diary that survives to this day. Incredibly, Dustyn Dubuque’s book is the first robust examination of that diary and of Burch’s story. His clear-eyed first telling of it should catch the attention of both scholars and Civil War aficionados. But really, everyone should read it, so we can understand what hell we went through to get here today.” Frank Smoot, author of Farm Life: A Century of Change for Farm Families and Their Neighbors.”

Below you will find titles on this site we have selected that readers of How Newell Burch Survived Andersonville Prison may like including the situation on the Iron Range in the early 1900s Incident at the Bruce Mine Shaft.

Incident at the Bruce Mine Shaft

In a climate of lawlessness and bigotry on the Iron Range in northern Minnesota during the late 1920’s, Joe and Sara, two young people on the verge of adulthood, get caught in the struggle of the Finnish to assimilate into American society.

Aria for a Farm: Lean Together or Fall Alone

Francis Nelson was too young to die.  His strong-willed daughter, Claudia, dealing with her grief and uncertain of the role she must assume, knew that she alone could save her farm and crave out a future for herself.  Read More!

Get a cup of coffee, relax, and enjoy the stories, memoirs, and poems of the Chippewa Valley Writers’ Group.  Read More!

Fresh Ideas for Breakfast from The Atrium Bed and Breakfast

This collection of recipes from the Atrium Bed and Breakfast features simple creations designed to keep you from spending the day in the kitchen!  Read More!