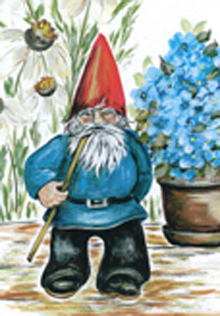 Written by Joy Bashara and Illustrated by June Nyberg

Did he belong near Boe, Norway? Maybe so. Grandpa Jim had named him Eilert Boe. Was his home near the woods with Karin, Helmer, and the other gnomes? Where was home and how could he find it again?

What Happens When a Gnome Disappears from Your Garden?

Eilert the gnome, the main character in the new book Eilert the Gnome Loses Home, didn’t know. Neither did June Nyberg, the illustrator of the book. Her own Eilert disappeared several months ago. He returned briefly, but then he disappeared a second time. June’s real-life experience sparked an idea in Joy Bashara, June’s friend, to write a story about Eilert, a gnome who loses home.

“I was inspired by June’s story,” Joy explains, “to write the Gnome Came Home Series in order to stimulate children’s minds about what home means and where you find home.”

Joy’s telling of Eilert’s story so clearly depicted the characters in the book that her words easily became pictures for June.

This book is intended to be read by children as well as with children. Using her playwriting skills, Joy has created a play of the story for presentation by elementary school children.

Writer Joy Bashara is a resident of Green Bay, Wisconsin, and a lifelong educator. Illustrator June Nyberg lives in Superior, Wisconsin, and is a long-time teacher and a lover of folk art.

Eilert the Gnome Came Home is written for children from five to ten years old.

Below you will find titles on this site we have selected that readers of Eilert the Gnome Loses Home may like including the Eliza series, Trouble at the North Pole and The Last Christmas Tree.

Trouble at the North Pole

Did you know Santa rescues hundreds of Christmas trees left on the lot Christmas Eve because they hadn’t found a home?  Read More!